FEBRUARY 2014: MELBOURNE, Australia and NEW YORK, USA: Prana Biotechnology (ASX:PBT / NASDAQ:PRAN) has today announced the results of its Reach2HD Phase 2 clinical trial investigating PBT2 as a treatment for Huntington disease. The double-blind, placebo-controlled study was conducted by the Huntington Study Group at research sites in the United States and Australia.  The study enrolled 109 individuals with Huntington disease who were randomly assigned to receive daily doses of either PBT2 250mg, PBT2 100mg, or placebo for 26 weeks.

The primary endpoint of the study was met. In this study, PBT2 was safe and well tolerated.   95% (104 of 109) of participants completed the study on their assigned dose.
An independent Data Safety Monitoring Board met on five occasions over the course of the trial and on each occasion recommended that the trial continue as per the original protocol.
There were no substantial differences in adverse events across the two PBT2 dose groups and the placebo group. Only one of the ten reported serious adverse events was deemed by the clinical site investigator to be related to drug treatment.  This occurred during the 4-week follow-up period (i.e. not on study drug) after completing the six month treatment.

The effects of PBT2 were tested on cognition, motor performance, behaviour and functional capacity, of which cognition was pre-specified as the main efficacy outcome.

There was a statistically significant improvement in performance on the Trail Making Test Part B (as illustrated in the graph), in the PBT2 250mg group compared to placebo at both 12 (p<0.001) and 26 weeks (p=0.042). 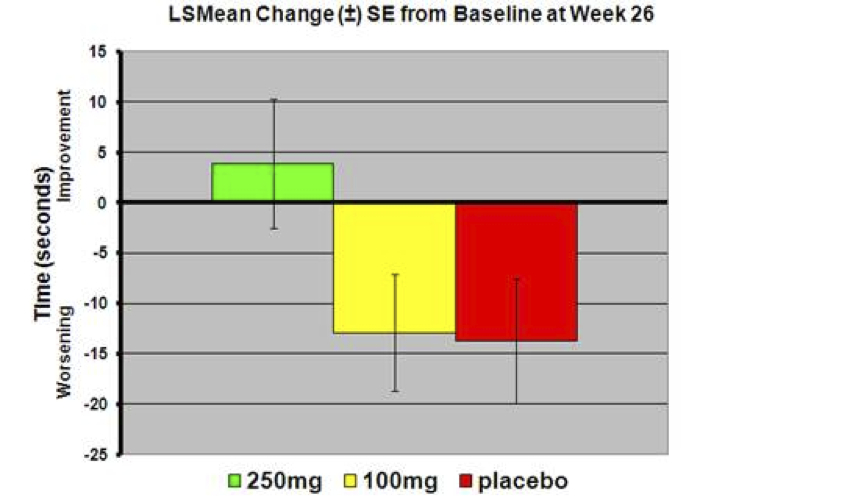 Trail Making Test Part B is a measure of executive function (e.g., ability to plan activities), which is impaired early in the course of Huntington disease and is also affected in Alzheimer’s disease.

Given the evidence from an earlier trial that showed that PBT2 improved executive function in Alzheimer’s disease patients, the Reach2HD trial included a plan to assess the effects of PBT2 on an Executive Function Composite z-score that included the Trail Making Test Part B. There was a statistically significant improvement in this z-score (p=0.038) in a pre-specified analysis of Reach2HD participants with early stage Huntington disease, as measured by their Total Functioning Capacity score. Across all participants, which comprised both early and mid-stage patients, there was a trend to improvement (p=0.069).

Dr Rudy Tanzi, Professor of Neurology at Harvard Medical School and Prana’s Chief Scientific Advisor, commented that “the observation of significant improvement in executive function with PBT2 in this clinical trial for Huntington disease and the previously reported Alzheimer’s trial, suggests a common mechanism for neurodegeneration in these diseases based on metal interactions. In my opinion, these findings significantly elevate the potential for PBT2 as an effective therapy for both Huntington disease and Alzheimer’s disease."

The improvement in executive function was accompanied by a small but favourable signal in a key measure of functional capacity. No significant improvements were seen on other secondary efficacy measures in the study.

Dr Ira Shoulson, Professor of Neurology at Georgetown University and Chair of the Huntington Study Group, who was not involved in the trial and acts as an advisor to Prana, added: “In the Reach2HD trial, the improvement in executive function performance was also accompanied by a favourable signal of a slowing of functional decline, as measured by the Total Functional Capacity score.  This is the first time we have observed dose-related slowing in functional decline over a six month period of treatment – which taken together with the safety reassurance –  will provide genuine optimism for the Huntington disease community to support a larger confirmatory trial of PBT2 in Huntington disease.”

As Huntington disease and other neurodegenerative disorders progress, there is a gradual loss of brain tissue or atrophy. In Reach2HD, brain imaging using magnetic resonance imaging (MRI) was performed in a small subset of patients (n=6) to map anatomical changes in brain structure.   In the combined PBT2 groups (n=4) a reduction in atrophy  of brain tissue in regions of the brain known to be affected by Huntington disease was observed compared to the placebo group.

Dr Diana Rosas, Associate Professor of Neurology at Harvard Medical School and the study’s co-Principal Investigator who conducted the imaging sub-study commented: “Despite the very small number of patients in the sub-study, the data are suggestive of a beneficial effect of PBT2 in regions of the brain that are known to be vulnerable to Huntington disease.”

Dr Ray Dorsey, Professor of Neurology at the University of Rochester and the Principal Investigator on the trial added: “We are very pleased that the results of the Reach2HD study have shown that PBT2 is well tolerated and generally safe over six months in individuals with early to mid-stage Huntington disease.”

“In addition, the results indicated a significant benefit on cognition that is consistent with the previous trial in Alzheimer’s disease and is accompanied by an encouraging finding in functional capacity. We are very thankful for the involvement of the research participants and investigators in this study and look forward to future trials of this promising therapy for one of the cardinal features of Huntington disease.”

Prana plans to advance PBT2 into a confirmatory Phase 3 clinical trial that could allow PBT2 to be approved for the treatment of Huntington disease.

A clinical appendix accompanies this announcement.